At The Edge Of Identity

It's 2 AM, my phone begins to vibrate and of course the first thing I think is that something has happened or someone has died. It's an awful gut feeling that almost always happens when one gets awakened suddenly by a phone so early in the morning.

The voice on the other end of the line says, "I'm sorry to wake you but I'm afraid...I don't know if I can continue with this". It's one of the young men that I have taken on as a mentee and is having a relapse in believing the lies he's been told all his life. My heart starts beating hard and I know this moment is crucial in helping him regain his foundational truth. This is one of many hurdles men will deal with in their journey. 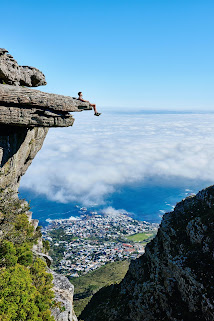 "What are you afraid of" I ask and he responds, "I'm afraid that I don't measure up to what God is asking of me. I feel like I should be punished for all my sins and things I've done wrong in my life. I feel like such a hypocrite even to think that God would accept me the way I am."  In all honesty, I can totally understand how he's feeling but it's a lie. In the fraction of a second, my mind took me back to those times I kept running from God because I knew I was too messed up for His approval. Too filthy for His love and knew there was no hope for me to ever become a child of His. And yet here I am taking a stake in this man's life and doing all I can to assure him God loves him even though he is in a rough mental place right now.

In that very moment it felt like the anointing of the Spirit just took over and I am speaking words that are just flowing sweetly and lovingly from my lips. Words that hug, words that warm a heart, and more that anything else, assures him that no matter what, Jesus will always be with him regardless of how he feels. Oh I totally understand this deeply as I've been rescued from that edge on more than one occasion.

You see, up until some years ago I struggled with who I was and where I was going and let me say that when a man finds himself in this position, options are not so readily available even from our most trusted sources. Being able to recognize and have a significant understanding of who a man is lays a foundation for who he will be the rest of his life. I was raised primarily by a stay at home mom while my dad worked out of town all week. As much as I learned about personal care from my mom, I didn't get the much needed guidance from dad on what it meant to be a man. In other words, I had to get my definition of manhood from my mom. Down the road I realized how messed up this was and although appreciative of my mom, I honestly didn't have the manly disposition. So what happens with a scenario like this? Well, I began to look for male role models around me and when I thought I found some, they really weren't so healthy for me, as much as a destruction of me. The results? I realized that if I was going to find myself, then the only person that could help me was me.

I share a little of my story because so many young men have and are growing up without a dad in their lives. This is only one example, but when you think about the world as a whole, there are many reasons  that men find themselves alone and have to learn life by themselves. Identity is lost in culture, in small towns and large cities; everywhere we look we see our young men longing for some love and guidance. They need someone to hold them when they're scared and afraid that their world is falling apart and it appears like no one is there to help them.  So what do they do?  They turn to people and things that only push them further into a world of chaos.  Fight is the first reaction because they feel there is no one, shoulder to shoulder with them, fighting the so unfamiliar giants,

I have not and will not lose hope for our young ones, the cost is too high! This is why the early morning calls or the late night calls for help with always go answered. I understand that it could be this one moment in time that will change the direction of a life.  Oh, what a gift-wrapped blessing it is to speak to a man about how God wants to have a relationship with him. God desires to walk alongside, be there when trouble comes, all the while revealing this man's true identity. Once this happens and he understands what has happened, he will discard his old life and all of the lies, and replace it with a new life. A life where he knows who he is, one with clear purpose and one where he realizes he has the greatest Father in the world! His world will still have difficulties, but the difference is he now knows he doesn't have to handle them alone.